What are Capability Indices

Terminology and Actual Versus Estimated Sigma

The standard deviation for the distribution of individuals, one important variable in all the capability index calculations, can be determined by either of two ways. It may be calculated or estimated. For an explanation of the concept of standard deviation, see Chapter 1.

Standard deviation may be calculated using the standard statistical formula:

σ (Sigma) symbolizes population standard deviation, N is the population size, x is an individual measurement, and µ is the mean of the population. Population means all parts being produced, not just a sample.

Usually, we work with a sample of the population, since this is more practical. In this case, the formula for standard deviation is:

Standard deviation may also be estimated using R (the average of the subgroup ranges) and a constant that has been developed for this purpose. The formula for estimating Sigma is:

σˆ (Sigma hat or estimated Sigma) symbolizes estimated standard deviation. R is the average of the subgroup ranges for a sample period when the process was in control. The constant d2 varies by subgroup size and is listed in the Appendix, Table A-1.

It is important to remember that the process must be normally distributed and in control to use the estimated value of Sigma. If both of these conditions are not met, the estimated value is not valid. If the process is normally distributed and in control, either method is acceptable and usually yields about the same result. Also, remember that neither actual nor estimated Sigma used in calculating capability will be meaningful if the process is inherently abnormal. See 5.6 Capability Measures for Abnormal Distributions for information on measuring the capability of abnormal processes.

If you have both estimated and actual capability indices available, choose one method and stay with it. Avoid the temptation to look at both and choose the one that is better, since this will introduce variation in results.

The most commonly used capability indices are CP and CpK. CP, which stands for capability of process, is the ratio of tolerance to 6 Sigma. The formula is:

he 6σ in the CP formula comes from the fact that, in a normal distribution, 99.73% of the parts will be within a 6σ (±3σ) spread when only random variation is occurring. 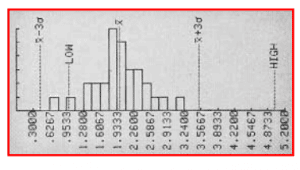 The CP for the sample distribution in Figure 5.4.1 is:

CpK = The lesser of:

Because we choose the lesser of the two values calculated, we find out how capable our process is on the worst side (the tail closest to the specification limit).

Using the example used in the CP calculation, 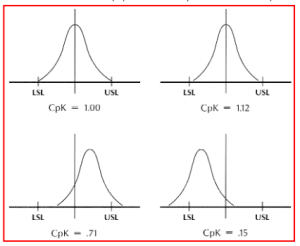 Since a CpK of 1.0 indicates that 99.73% of the parts produced are within specification limits, in this process it is likely that only about 3 out of 1,000 need to be scrapped or rejected. Why bother to improve the process beyond this point, since it will produce no reduction in scrap or reject costs? Improvement beyond just meeting specification may greatly improve product performance, cut warranty costs, or avoid assembly problems.

Many companies are demanding CpK indexes of 1.33 or 2.0 of their suppliers’ products. A CpK of 1.33 means that the difference between the mean and specification limit is 4σ (since 1.33 is 4/3). With a CpK of 1.33, 99.994% of the product is within specification. Similarly a CpK of 2.0 is 6σ between the mean and specification limit (since 2.0 is 6/3). This improvement from 1.33 to 2.0 or better is sometimes justified to produce more product near the optimal target. Depending on the process or part, this may improve product performance, product life, customer satisfaction, or reduce warranty costs or assembly problems.

Continually higher CpK indexes for every part or process is not the goal, since that is almost never economically justifiable. A cost/benefit analysis that includes customer satisfaction and other true costs of quality is recommended to determine which processes should be improved and how much improvement is economically attractive.

Relationship between CP and CpK

By looking at the formulas, you can see the relationship between CP and CpK. CpK cannot be greater than CP for a process. Only when the mean is exactly centered on the specification midpoint is CpK = CP. Thus, CP is valuable as an indicator of how much better the CpK could be if the process were set up so that the center of the distribution were closer to the specification midpoint. CP answers whether the distribution of individuals could fit within the tolerances (if centered). CpK answers whether the distribution does.

CR is a less-frequently-used substitute for CP. It is simply the inverse of CP. Thus, the formula is:

Since CR is the inverse of CP, a CP of 1.33 equals a CR of 0.75. The smaller the CR value, the better. CP is more frequently used than CR since it is much easier to compare CP to CpK.