The maximum probability that a bad lot will be accepted by the sampling plan.

A curve or distribution showing a central peak and tapering off smoothly and symmetrically to tails on either side. A normal (Gaussian) curve is an example. 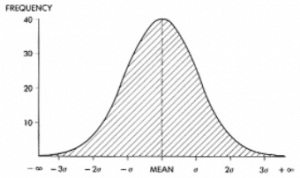 Systematic error which leads to a difference between the average result of a population of measurements and the true, accepted value of the quantity being measured.

A frequency distribution which has two peaks. Usually, an indication of samples from two processes incorrectly analyzed as a single process.

Given that a trial can have only two possible outcomes (yes/no, pass/fail, heads/tails), of which one outcome has probability p and the other probability q (p + q = 1), the probability that the outcome represented by p occurs r times in n trials is given by the binomial distribution.