You must have control over an industrial process in order to produce interchangeable parts. Eli Whitney and other forerunners of the Industrial Revolution discovered this a bit too late. In 1798 Whitney won a contract from the U.S. government to produce 10,000 muskets. He was convinced he could work out a system of making gun parts to a standardized pattern.

Nowadays that wouldn’t be anything special, but back then it was practically unheard of. The conventional method of manufacturing a gun was to have a skilled craftsman fashion the whole piece, forming and fitting each part. If a part broke, a new one would have to be custom-made. For a nation in need of armaments, the concept of interchangeable parts was attractive. Unfortunately, out of Whitney’s first manufacturing run of parts for 700 guns, only 14 guns could be assembled. The idea temporarily failed until quality control was introduced.

Why Quality Control is Important

Quality control was necessary because mass-produced products lacked quality, and early manufacturing processes lacked control. The concept of quality control was to ensure that a specification was written and all parts conformed to it. 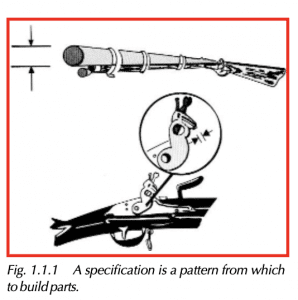 First, a part was evaluated in terms of its function and success in meeting the needs and expectations of the customer. Engineering then created a specification (Figure 1.1.1). The specification called out the materials, the dimensions, and the finish. The dimensions were usually expressed as the target dimension, or nominal, and the high and low limit, or tolerance.

What Does Quality Control Do

The job of quality control then was to inspect parts to make sure they conformed to specification and evaluate bad parts to find out why they didn’t. As long as a high percentage of good parts were made in a suitably efficient way, the process by which they were made was not that important.

The experience of World War I, however, raised doubts about the adequacy of this kind of quality control. The war was America’s first experience with supplying vital materials over long distances. The quality of both finished products and replacement parts had to be guaranteed under conditions that prohibited the on-sight evaluation of failures, and in volumes that made 100% inspection a losing proposition.

How Statistical Quality Control Was Named

Quality control was inadequate because it was reactive. It relied too much on the evaluation of parts and part failures. The logistics of war demanded a more active quality function. The focus had to shift to the home front, so to speak — in other words, to the manufacturing process. Of course, this new emphasis had to have a name. Statistical quality control was the new name. It is also called statistical process control to emphasize the importance of the process. But the old concept of quality control lacked something besides a simple shift of emphasis: it lacked statistics.

Application of Statistics to Quality Control

We owe the application of statistics to Dr. Walter A. Shewhart, a physicist at Bell Labs. Shewhart specialized in Brownian movement, the random behavior of small particles in a fluid caused by the collision of molecules. Statistical methods for analyzing large amounts of data were useful to this type of study. It was natural for Shewhart to use his knowledge of statistics when asked to help in the war effort.

Shewhart was assigned the task of designing a standard radio headset for army troops. He began by measuring the head sizes of 10,000 troops (Figure 1.1.2). 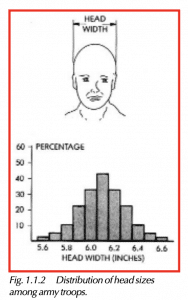 He arranged the sizes from small to large and marked the frequency of occurrence of individual sizes. What intrigued him was that the pattern of the distribution resembled what is known as the bell-shaped curve, or normal distribution, shown in Figure 1.1.2.

It was a pattern he encountered when studying the Brownian movement, and he wondered whether such patterns and the methods of analyzing them, had broader applications. He eventually developed some descriptive statistics to aid in manufacturing and wrote a book published in 1931, Economic Control of Quality of Manufactured Product. The book had very little impact at the time it was published, but, gradually, people became aware of the value of statistical methods. One very important technique he developed is called the Shewhart Control Chart, or x & R chart.

Statistical quality control saw its first widespread application during World War II. The War Department required industries making war materials to implement statistical controls, and hired statisticians to help teach them. One of the statisticians was Dr. W. Edwards Deming, who later helped foster the statistical quality movement in postwar Japan. The Japanese faced many of the same problems in guaranteeing quality over long distances that America faced during the war. Lacking in many natural resources, Japan’s ability to produce and export manufactured articles was necessary for survival. Fortunately for them, they listened to sound advice, and they learned to implement it. 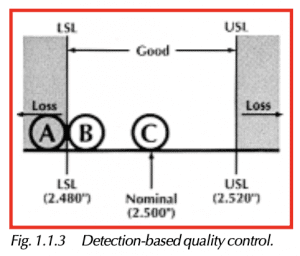 In a detection system, the focus is on catching parts or products that fall outside the specification limits (LSL & USL). The drawback to this approach is apparent when we compare the three parts — A, B, and C — that are shown in Figure 1.1.3. Part C is right at the nominal, or best, value. Parts A and B are both undersized, Part B is just over the lower specification and Part A is just under the specification. In a properly functioning detection system, parts B and C would be determined to be more alike than parts A and B: B and C both pass inspection, while A fails inspection. A true comparison of the characteristics of each part would reveal A and B to be most alike. 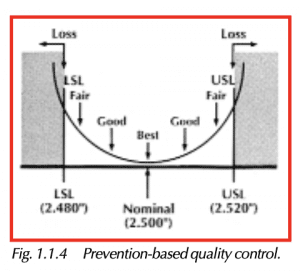