How to Minimize total cost of Inspection and Repair

An entirely different perspective on incoming lot inspection is obtained if one views the goal to be minimizing the total cost of incoming parts inspection, plus minimizing the costs of repairing and testing assemblies that fail because of defective parts being incorporated into these assemblies. Dr. W.E. Deming offers some simple mathematical proofs to show that the least-cost method of production is either no incoming inspection or 100% inspection (W.E. Deming, 1982, Chapter 13).

To illustrate this point, some suppositions must be made:

To examine this premise mathematically, we need a few definitions:

p — The average fraction defective in the incoming part receipts (say for one day).

k1 — The cost to inspect one incoming part.

k2 — The cost to fix and retest an assembly that had a defective part.

Several conclusions can be drawn from this analysis: 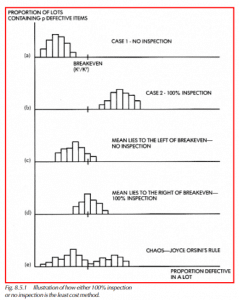 Comparing the Deming method with standard acceptance plans, such as the Dodge-Romig tables and MIL-STD-105E, leads to some surprising conclusions. For example, the theory behind the Dodge-Romig tables is said to minimize the cost of inspection to achieve a prescribed level of quality or percentage of acceptable parts, rather than minimizing the total cost.

Anscombe says, “It is time to realize what the problem really is, and solve that problem as well as we can instead of inventing a substitute problem that can be solved exactly but is irrelevant,” (Journal of the American Statistical Association, 1958, pp. 702-719).

It is argued that, in many circumstances, prescribing an acceptance plan will cost considerably more in total than 100% inspection. It is argued further that if the process producing the parts were in good statistical control, tests of samples would provide no useful information. Therefore, the ideal situation is for the vendor to supply proof that the production process is in statistical control.