The problem identification and analysis tools described in the last article provide a means to prioritize and analyze individual problems. The result of this analysis will suggest specific problems or processes that require further work using the next step in our SPC model: Use SPC to bring the key variables into control. These selected variables or processes may include items such as:

Common and Assignable Cause Variation in Control Charts

What are Control Charts

Control charts provide a graphic comparison of a measured characteristic against computed control limits. They plot variation over time and help us distinguish between the two causes of variation through the use of control limits. These limits are vital guidelines for determining when action should be taken in a process. Figure 3.1.1 shows a portion of a typical x & R chart. It is important to note the following elements: 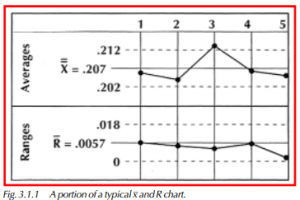 1) Each of the points on the x portion of the chart represents an average of one subgroup’s readings. Because each point is an average value, all of the points taken together will tend to be normally distributed if they are from a process showing stability (refer to the Central Limit Theorem in Section 1.3).

2) The dashed-line control limits are drawn at approximately +3 and –3 standard deviations from the central line on the x portion of the chart. Because points on the chart from a process showing stability tend to be normally distributed, we now expect 99.73% of all the points to fall between the two control limits (refer to the discussion on standard deviation in Section 1.3).

3) Point #3 on Figure 3.1.1 is beyond the upper control limit for x. There are four possible explanations for this occurrence: a measuring error, a plotting error, an assignable cause, or the possible exception to the probability that 99.73% of all common causes will fall within control limits. 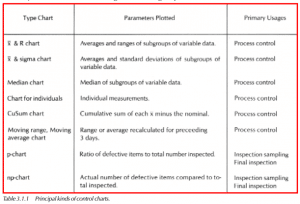 The x & R chart is the most common form of a control chart for variables data, and one of the most powerful for tracking and identifying causes of variation. The xchart is a continuous plot of subgroup averages. The R chart is a continuous plot of subgroup ranges. A subgroup typically ranges in size from 2 to 20 samples. When using subgroup sizes greater than 10 samples, it is recommended that you use a sigma control chart rather than range.

This chart combines both the x & R information into one graph. The median is the middle value when data is arranged according to size. A median chart yields similar conclusions to the x & R chart, and is easy to use. Typically, median charts are used with subgroup sample sizes of 10 or less. 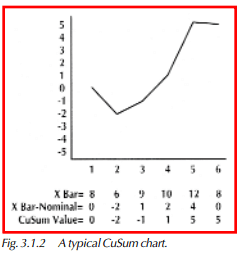 This chart is used primarily in industries where the output of a process is very stable from piece to piece, but may vary from day to day or week to week: e.g., a metal stamping application where the dies wear slowly, or a plating application where the same chemical bath is used each day. In this example, a three-day moving average chart would plot a point for Friday by averaging Friday’s reading with readings from Thursday and Wednesday. Similarly, a moving range chart would plot the range over a three-day period each day. These charts tend to dampen what would be a single out-of-control reading on the x & R chart, and distribute effects over a longer period of time. Moving average and moving range charts are described in greater detail in Chapter 4.

The u-chart is similar to the c-chart in that it tracks individual defects. Unlike the np-chart, the u-chart may use subgroups of varying sizes. A single point on a u-chart represents the average number of defects on each part in a subgroup. For example, if the subgroup size equals 10, and there are 5 defects in that subgroup, the u value would be 0.5. This signifies an average of 0.5 defects on each part in that subgroup.