This section concerns itself with distributions of a continuous nature, as opposed to discrete. Continuous implies that the occurrence of values within a range or interval is random, and not of a countable, finite set. Examples of discrete distributions include binomial and poisson. The most familiar continuous distribution is the normal (or gaussian) distribution.

The Moments in Dealing with Frequency Distribution

Frequently in statistics, one is able to compute several moments of a distribution. The first four moments are related to mean, variance, skewness, and kurtosis, respectively. In dealing with frequency distributions, these four moments indicate location, spread, symmetry, and peakedness. 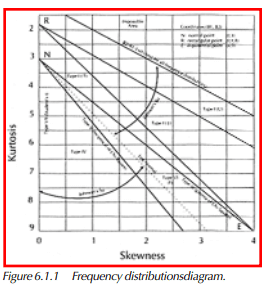 These techniques involve either

1) Assuming that the data may be described definitely by one of several other well-known distributions (Exponential, Log-Normal).

Each of the above shall be described and demonstrated.