What are Pareto Diagrams

Pareto diagrams, named after the Italian economist Vilfredo Pareto (1848-1923), provide a method by which causes of a problem can be arranged by their relative importance. The diagram has as its basis the idea of the “vital few” and the “trivial many.” Very often more than half of all quality problems are the result of one cause. It is a much better tactic to locate the most important cause and eliminate it rather than attempt to eliminate all causes at once. Eliminating the one important cause will result in a dramatic quality improvement with the greatest payback and, possibly, the least amount of effort.

Where Pareto Diagrams Can Be Used

Pareto diagrams can be used with either variable data or attribute data, but they are used most often with attribute data. Usually, the data is expressed in percentages or the number of occurrences in each category. For example, inspection data can be broken down by the number rejected due to various causes. Table 2.3.1 lists some sample inspection data. The first step in making a Pareto diagram is to identify the categories of data we wish to display. Often, we will have previously collected data to place on our diagram. If not, we will have to collect data using methods outlined in the following sections. 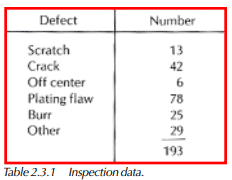 Next, draw a left vertical axis and label it with a scale going up to the total number rejected. See Figure 2.3.1. Draw a horizontal axis and mark off equal lengths to be labeled with each of the causes. Put the most frequent cause to the left, and the rest in descending order. If there is an “other” category, put it on the right side, even though it may not be the smallest. The “other” category can be used to group lesser causes and reduce the width of the diagram. Now draw vertical bars of equal width for each cause, each at a height that matches its frequency to the total scale. 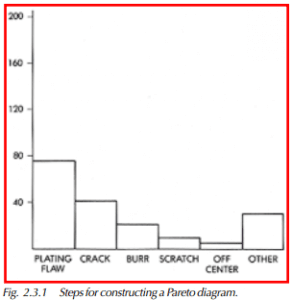 What Alternative Measures Do We Have

An alternative measure is to put an additional scale on the left side, which represents the cost of defectives. On the right side, draw a second vertical axis and label it with the percent defective. Finally, if desired, draw a segmented line, which represents the cumulative percentage, starting at the bottom left corner and ending at the upper right. The completed diagram will be similar to Figure 2.3.2. The segmented line simply totals each defect, but it also provides a way to quickly estimate percentages. Draw two horizontal lines to the percent scale and subtract to get the percent due to any one cause.

Pareto Diagrams have these characteristics: 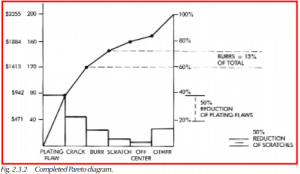 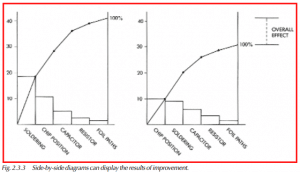 After a cause and effect diagram is made, data must be collected to determine the relative importance of causes. The Pareto diagram can be the first useful document produced after initial data collection.