What is Short-Run x̄ and R Chart

This is done by normalizing the subgroup averages and ranges into unitless ratios. When plotting the normalized data on a control chart, the control limits and centerlines become constants and do not have to be calculated. Also, since the plot points are unitless ratios, it is possible to plot characteristics with different units of measure (such as weight, thickness, and hardness) all on the same control chart.

The formulas for this chart are slightly different than the traditional x̄ & R chart. Let’s start by first looking at the short-run range chart.

The nominal chart requires the standard deviations to be similar across all parts on the same chart because variation would cause the range chart to be out of control and the R used in the control limit formulas (for both the range and the x̄ chart) to be unreliable.

Therefore, the range plot point would be in control if it fell between the UCLR and LCLR, and did not violate any trend rules. This is described using the following formula:

To plot characteristics with different standard deviations on the same control chart, the R must be removed from the control limit calculations. This is accomplished by dividing through the above formula by R:

By dividing the subgroup range by the R value (which from now on will be called Target R) for that part number, the plot point becomes:

where: R is the range from the current subgroup Target R is the expected range calculated from one of the methods described below

The result can be plotted on a range chart with D3 as the lower control limit, D4, as the upper control limit, and 1 as the centerline, as illustrated in Figure 4.6.1. (D4and D3 are constants that can be found in Appendix A-1.)12 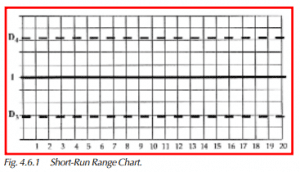 With this method, the control limits and centerline are known before the first point is plotted. The key to the validity of this method lies in the Target R. There are four ways to get Target R.

If the characteristic has been monitored using control charts in the past, use the R from the most recent in-control range chart. This is the best method since it is the same as plotting new data against old control limits, as is done using traditional control charting methods.

Sometimes, quality assurance records contain measurements of the characteristic represent the variation demonstrated during normal production. (Records that only contain discrepant measurements or measurements obtained after rework are not appropriate with this method.) If this is true, the standard deviation(s) of the measurements can be converted into a Target R using the formula:

where: f2 13 comes from the table below

s is the standard deviation from the quality records

where: m is the number of measurements from the historical data used to calculate s

(You should have at least five measurements from your historical data when calculating s.)

This method describes how to calculate a Target R14 based on engineering tolerance, and should only be used in those cases where all that is available is a print or specification. The Target 14R should be updated (using the average range of the actual data) if the plot points on the short-run range chart indicate that the Target 14R does not represent the process. When designing a tolerance for a characteristic, engineering would like the process used to produce a characteristic capable of meeting the tolerance. In other words, engineering would like the process to have a Cp of at least 1.0. (See Chapter 5 Process Capability for more information on Cp.)

The control limits for the x̄ chart are also a function of  R 15:

By inserting the actual control limit formulas, we get:

By subtracting X from the inequality above, we get:

At this point in the derivation, the control limits still depend on R15. This is resolved by dividing through by R15.

The control limits are independent of 15R and x̄̄15. Part numbers with different averages and different standard deviations cannot be plotted on the same chart with a plot point of:

If the characteristic has been monitored using control charts in the past, use the x̄̄ from the most recent in-control x̄ chart.

Use the average of historical records to estimate Target x̄̄. (Records that only contain discrepant measurements or measurements obtained after rework are not appropriate with this method.)

If the characteristic being produced is brand new and no data is available to help estimate Target x̄̄, use the print specification nominal. This should be updated if the observed and/or desired process average is different than the print nominal. On the short-run x̄ chart, the centerline is always 0, with the upper control limit and lower control limit as +A2 and -A2 respectively. (A2 is a constant that can be found in Appendix A-1.) 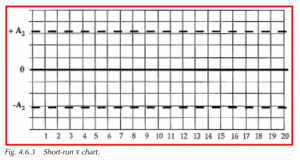