What are the Sources of Error in Measurement

Several sources of error exist in most instruments — nonlinearity, hysteresis (e.g., gear backlash), and sensitivity to environmental factors such as temperature, magnetic fields, or electrical fields. Instrument error is often magnified by the fixturing required in the measuring process. Poor electrical connection, improper fastening of mechanical linkages, and loose clamps are examples of fixturing problems. Temperature-induced error, in addition to its effects on measuring instruments, affects the specimen being measured. As temperature changes, the length (L) of a specimen changes as follows: 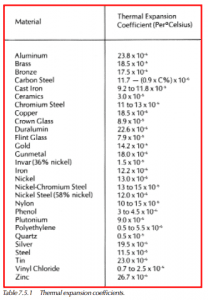 Deformation is the second largest source of error following temperature. Deformation can be caused by the following:

A compression force (within the elastic limit) will cause deformation. The deformation (DL) can be calculated as follows by Hook’s law:

A= cross-sectional area in mm2

Variations in recorded measurements can also be evident if different test procedures are used to measure the same product. Different test procedures can introduce variation in measurement techniques if they are not carefully designed. Errors in data often occur when the operator takes a reading from the instrument and then enters it on a form or similar media. These errors can consist of transposing numbers, recording incorrect numbers, or writing illegible numbers, causing transcription errors to occur when the data is later analyzed.