What are the Tests for Normality

In the strict sense of a capability study, the shape of a distribution is not as important as how it compares to the engineering specifications. However, if we must express capability as a numeric value, such as the capability indices covered previously, these calculations assume a normal distribution. Remember, all of these indices use the standard deviation calculated using the normal distribution rules. In some cases it may help to understand the characteristics of abnormal distributions and underlying causes. For further reading on this subject refer to the Statistical Quality Control Handbook, by Western Electric Company, or other standard statistical texts.

Many distributions are symmetrical and unimodal even if they are not normal (Gaussian). Certain statistical calculations can be completed to help determine if a distribution is truly normal. A brief description of one such calculation follows.

How Calculation Determines the Expected Distribution

One calculation we can complete is chi-square (χ2 ). This calculation determines how well the collected data follows the expected distribution — in this case, the normal distribution. This test is also called a goodness-of-fit test because it determines how well the normal curve fits our data. To complete this calculation, the data is placed into classes (cells). A class is similar to a cell on a histogram. It has an upper and lower boundary and we determine which data points fall between the boundaries of each class. The frequency for each class is determined, and if there are not at least 5 samples in the class, it is combined with the next class. Once this is completed, the chi-square calculation is completed for each class.

The chi-square formula is:

O is the observed frequency and E is the expected frequency, based on the normal distribution. The ∑ means that we add all the class results to obtain the chi-square value. This value is then compared to the value from the chi-square table found in Table A-5 of the Appendix.

The number of degrees of freedom is determined by the number of final classes minus 3. We are estimating 3 statistics (mean, standard deviation, and frequency) to complete this test, which is why we subtract 3 from the number of classes. You begin to see why we need a lot of data to determine if a process is normally distributed and capable.

If we do not have sufficient data, we will not obtain enough classes to complete the goodness-of-fit test. Normally, we select what we call a Confidence Level of 0.95, which corresponds to a significance level or critical-chi square or alpha (Producer’s Risk) value of 0.05. If the computed chi-squared value of the distribution is less than the chi-squared value associated with the critical-chi square (0.05) of the same degree of freedom, the distribution is normal. 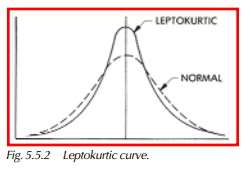 There are many other methods for determining if a distribution is normal. This has been a brief introduction to the topic. Many of the references at the end of this chapter cover this topic in greater detail.

Kurtosis is a measure of the flatness of a curve and can be used to describe curves that are symmetrical but not normal. Kurtosis is symbolized by y2.

(y1) — Skewness is a measure of a distribution’s symmetry. Distributions can be skewed in either a positive or negative direction if one tail extends considerably beyond the other (Figures 5.5.3a and 5.5.3b). 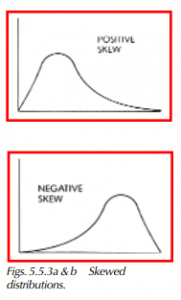 Exponential curves are often encountered with electronic parts testing (Figure 5.5.4b). The characteristic is having more observations that occur below the mean than above it. 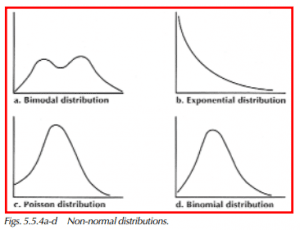