The InterGage card eliminates the need for an external power supply or an available serial port. In addition, it delivers significantly faster scan rates when used in TIR (FIM) applications. 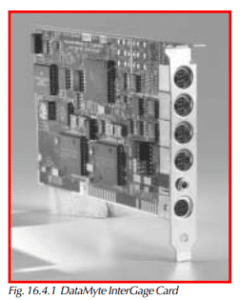 DataMyte’s 916 Precision Gaging System is designed for applications requiring extreme precision in dynamic and static measurements. Using DataMyte Simulscan™ technology, the system scans all probe ports for data simultaneously to eliminate sequential scanning errors found in other scanning systems, without increasing scan time. Functions of the 916 include LVDT probe configuration, calibration, mastering, previewing (measurement), and data collection. The 916 multiplexer is factory-hardened and adaptable to any workstation. 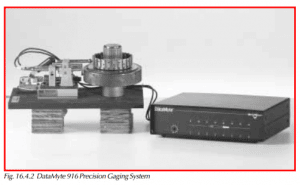 Simulscan provides simultaneous probe scanning at 1000 scans per second on as many as 16 probes, with unsurpassed accuracy for applications, such as TIR, contour matching, concentricity, circular runout, and total runout.

The 916 works with your existing personal computer and DataMyte Quantum software, and plugs directly into the serial port. Or, you can use it as part of a complete DataMyte system, coupled with a Pentium®-based DataMyte 9700 light industrial computer. As many as eight 916s can run off a single computer. In addition, the 916 has its own power supply; it does not depend on the computer for power. It uses its own connector port to interface with the personal computer, and, in most cases, leaves one serial port open on the computer running Quantum software.

Also available in this line is the 914 LVDT Gaging system. This system eliminates the need for column gages, and provides a direct interface between the LVDT and a DataMyte 953 data collector.

Previous What are Fixed-Station Data Collectors
Table of Contents