What are Gage Capability Studies

All gages and test equipment have inherent variability. Whether this measurement error (capability) precludes using a given gage for a statistical analysis in a specific application can be readily determined using an established methodology.

Consider a sample study: five parts, three inspectors, one gage, a single control dimension, and two sets of readings. (The following is reproduced with permission from Industrial Quality Control. See the reference at the end of the chapter.)

Five parts are selected and a single dimension specified for measurement. The parts are then numbered sequentially, 1 through 5. Three inspectors are selected; each uses the same gaging instrument, and measures the parts in a random order to assure that any drift or change will be spread randomly throughout the study. When the first set of readings is obtained, the inspectors measure a second set in a random order. To eliminate the possibility that one inspector could bias another inspector’s reading, the individual conducting the study should be certain that no information is exchanged. Figure 7.7.1 shows the results plotted on an average and range chart. The readings and results will be carried forward and used as a sample capability study.

Repeatability is the variation obtained when one person, using the same measuring instrument, measures the same dimension two or more times. See Figure 7.7.2. In this example, only two measurements were made on each piece, or a sample size of 2. The standard deviation for these values can be estimated using the average range. In control chart applications this is done using the formula below:

The factor d2 is essentially independent when the number of samples, k, is larger than 10 or 15. For smaller k values, Table 7.7.1 gives corrected 1/d2 factors.

Calculating the estimated standard deviation within parts for each inspector in Figure 7.7.1 (repeatability) gives the following results: 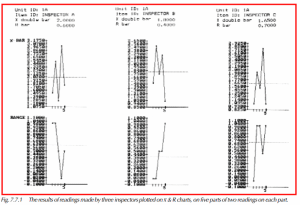 Assessing these results individually, Inspector B has the least variation and the best repeatability. Assuming, however, that all three inspectors normally perform this gaging operation, a standard deviation can be calculated using the average range for all three: 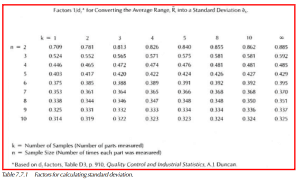 Reproducibility is the variation in measurement averages (between inspector variation), where: 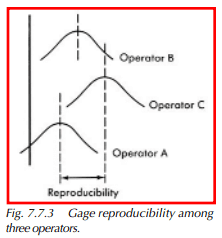 Statistically, variances can be combined to give a single value according to the formula:

This resultant value would be used to measure the repeatability and reproducibility, or

It is immediately apparent that reduced variability could be attained by inspector training, which could minimize the differences in averages, or by obtaining a more precise gaging device.

Assume the total tolerance for the parts used in this study is 3.0. A 99% spread factor is chosen to provide a high confidence level for the gage repeatability and reproducibility. The tolerance consumed by the measuring system is calculated using this formula:

The constant, 5.15, is derived from the Table of “Areas Under the Normal Curve” (Appendix, Table A-3). The constant represents a 99% confidence level that any gage R&R readings with these parts, equipment, and operators would fall within the same range of variability.

This percentage (91.73) cannot be directly associated with the percent good parts rejected or the percent bad parts accepted. The situation is undesirable, however, since the accepted standard for gage capability is approximately 10% or less of the total tolerance 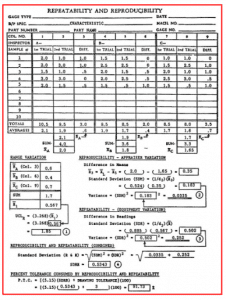 Previous mention was made concerning the effect that measurement error had on accepting defective material or rejecting good material. This aspect was explored by Alan R. Eagle. (See the references at the end of the chapter.) The general concept is shown graphically in Figure 7.7.5. In this illustration, the gage or testing device is zeroed on the upper and lower specifications, and the measurement errors are distributed about these points. 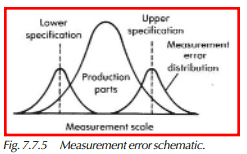 It is obvious that, due to these errors, a probability exists that a good part could be rejected or a bad part accepted. Several assumptions were made in calculating the probabilities involved (a normal practice in statistical analysis): 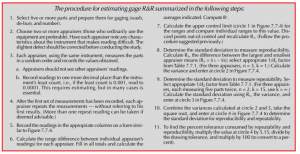 Using curves developed by Eagle, it is shown that a gage which consumes 91% of the specified tolerance would only accept 1.45% defective parts on the low end, and would reject about 7% of good parts on the high side. Since these would logically be re-inspected before final rejection, relatively few errors would be made.

In Quality Planning and Analysis (see the references at end of the chapter), a rule of thumb is given:

For situations where the specifications include more than ± 2 standard deviations of the parts, the graphs overestimate the actual probabilities. For the converse situation, i.e., less than 2 standard deviations are included in the specifications, the graphs underestimate the actual probabilities. This latter condition would indicate that the major problem exists in the machine or process, not the gaging.

xists in the machine or process, not the gaging. If the process is not centered or not normal, errors would also exist and the problem would have to be solved by other methods. Simulation is one technique that could be used if the conditions warranted such an approach. Also, if the gage is used to obtain data for control chart purposes, the fact that the process mean fluctuates could produce results that would have to be individually analyzed.

This method was presented primarily to reveal that the percent tolerance consumed by repeatability and reproducibility should not be judged solely by its magnitude, but must be further evaluated to determine its effect on potential decision errors.