What are the Diverse Bakery Operation

A worldwide supplier to McDonald’s Corp., runs one of the most diverse bakery operations in the world. With headquarters on Chicago’s bustling south side, the company’s bakers were striving for uniform quality standards as they supplied a wide variety of buns for McDonald’s sandwiches in the United States and in each major European country, in Japan, and most recently, in India. Traditional baking is an art, but to meet McDonald’s strict requirements, the company had to create a science to ensure product performance.

Company officials knew there was a definite link between process parameters and product performance. It had tracked times, temperatures, and speeds in relation to product characteristics. Operators used manual x-bar and R charts for dough piece weight and finished bun weight, but hand calculations left too much room for variance. 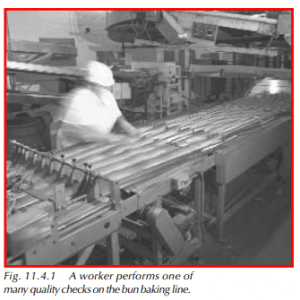 The bakery began creating its own data collection system with help from outside consultants. However, it quickly became apparent that developing a system internally was too labor-intensive for the company’s small staff

The company began looking for other ways to automate. It considered an automated weighing system being utilized by its French bakery division. However, company officials felt that the system lacked versatility, because it documented only weight parameters.

The bakery began using DataMyte Quantum software to monitor process parameters. The new system could measure and analyze all of the bakery’s quality parameters, including weight and temperature, but also time and speed of the baking line, color, bun height, diameter, symmetry, break and shred, blotching and bun slope.

Meeting the needs of the world’s largest fast food company is no small task. For example, the bakery’s Chicago headquarters has a capacity for 7,600 dozen buns a day. At that plant, a total of 25 time and speed parameters are measured from mixture point to finished product. These include measurements taken at each major operation, including the mixer, proofer, cooler, slicer and wrapper, right up to the point where finished buns await loading on trucks for delivery to individual McDonald’s restaurants.

Temperature settings are recorded for dough at various points, including the mixer, the oven, and the coolers. The company records data to meet McDonald’s standards, as well as its own strict quality standards. Temperature data is currently being entered manually using a sealed keyboard, but the bakery is planning to use PLCs to record temperatures in the near future. Weights are entered using the sealed keypad, a regular keyboard, or directly from scales measuring weights of 1 to 10 grams.

The divider, a machine that extrudes the dough into the small pieces from which buns are formed, is also known as the “cash register” at the plant. DataMyte software is used here to measure weight variations in dough pieces.

A capability report is issued once per shift, including a control chart showing the top five exceptions. This information is used to isolate problems and reduce variation.

How critical is reduction in variation to the baker’s business? A variation of just one gram of weight per bun can increase

McDonald’s costs $1 million nationwide. By knowing its variation, the bakery can modify its scaling weight to provide better value for its customer.

DataMyte provided assistance training old-line experts to use a software-based system. Company supervisors from around the world attended the DataMyte Technical Institute. They took what they learned back to their plants and trained operators and bakers to record data with the Quantum system. Now the operators are impressed with the DataMyte software.

The Quantum system has performed so well for the international bakery operation, it is now being rolled out worldwide, most recently in Japan. The company-wide system utilizes DataMyte Quantum SPC DC, Quantum SPC QA and Quantum Executive software. In many cases, the software also runs on DataMyte 9000-series data collection stations.

The company is now testing a new on-line optical scanning system, including a laser measurement device, at its Chicago bakery. This will automate part of the bun measurement process, with readings fed directly into Quantum software to avoid possible keystroke errors.

The DataMyte collection system will help the bakery strive to meet criteria for McDonald’s Sweeney Award, a supplier honor with guidelines similar to the Baldrige Award.

Traditional baking is an art, but with DataMyte’s help, this bakery has also been able to make it a science.