What is a Business Jet Manufacturer

This well-known manufacturer of business aircraft and aerospace subassemblies did not have an SPC program. Increasing customer requirements, and the pending approval of a major new aircraft for full production, forced a full investigation into which kind of SPC program to implement. 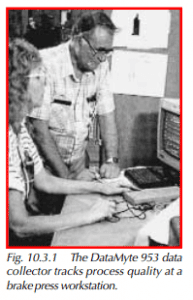 The company did not have an SPC program. Through extensive investigation, it decided that it wanted to start with automated SPC, skipping entirely the manual data collection and paper-charting type of program.

An implementation team, headed by the supervisor of industrial engineering, and including factory floor operators, engineers from various disciplines, and quality assurance people, reviewed the literature, attended trade shows, and narrowed the choice of SPC data collection manufacturers to four. The implementation team then brought the equipment in-house to see how it fit with their operation, people, budget, and plans for the future.

The team found that the DataMyte 953 was far superior to other data collectors they evaluated. The user-friendly features were the 953’s biggest selling point. It was tested with operators in the fabrication area, and the team found that competing models were difficult to use. The company didn’t want its people dealing with time-consuming manual calculations or difficult-to-learn equipment. The data collection system chosen had to be easy-to-use to help guarantee success.

Initial implementation of the 953 was for detail parts work, and there are now seventeen 953s in use in areas such as brake press, punching, shear cutting, saw shop, and with numerically-controlled [NC] milling machines.

Data taken is within sampling guidelines, and sample size depends on the number of parts per order. An internal parts order may consist of 30 to 40 parts, while an external order may be for 20 to 300 parts. For an order of 100 parts, 15 parts would be measured.

In the brake press area, gages used include calipers and digital protractors. Most of the parts being measured are brackets or angles used to fasten larger parts together. For the brake press area, the company has identified a number of assignable causes, and these are programmed into the 953. The 953’s red alert screen immediately calls the operator’s attention to an out-of-control parameter. The operator can then choose a cause from a list or enter a cause using the keyboard.

Some parts coming in weren’t consistent; and many had been improperly cut. Since all parts are produced in-house, operators could then backtrack through the process, looking as far back as raw stock, if necessary.

Operators who find an out-of-control point or trend not only enter the cause, but are also empowered to make an on-line adjustment. The lead operator is notified of the problem, and the data goes on to be analyzed and reported using DataMyte Quantum software.

Histograms and control charts at each workstation let everyone see how the company is doing. The company also tracks CpK monthly on bulletin boards in each area.

The company has 20 Continuous Quality Improvement teams in place, and SPC is one of the tools of continuous improvement. The company also conducts SPC training for all shop personnel prior to implementation and holds SPC classes for management.