What is a Truck Parts Manufacturer

Fasteners at a hitch assembly station were produced using hand-held power impulse guns. The power guns tended to drift up or down from the set torque value, resulting in out-of-control fasteners. To counter the problem, fasteners were checked periodically using manual click wrenches, but the data was subjective and was only collected by first-shift operators. In addition, the guns periodically were taken to the maintenance area and adjusted. This process resulted in lost production time and varying production quality. 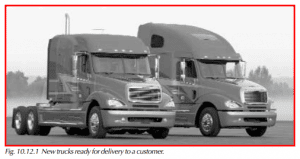 Real-time control charts and histograms were provided at each Quantum SPC/DC station as the data was collected. Operators were notified of out-of-specification and out-of-control events, then prompted to enter an assignable cause and a corrective action.

To address fastener torque values, a Datamyte 3053 was connected to two in-line torque transducers. Twice per shift, the operator checked each of two fasteners with a subgroup size of four. The Datamyte 3053 automatically recorded the peak torque value and plotted a control chart at the end of the subgroup. The assembly number selected from a “pick list” in the 3053 was recorded with the data.

The data was uploaded to the Quantum Database using RCSL (Remote Client Serial Link). The data was also viewed in Quantum SPC/DC running on the same computer. When necessary, the operator “double-clicked” on the last plot point and entered an assignable cause and corrective action.

Rather than waiting for guns to be brought in for adjustment, maintenance department personnel were now able to read the new data and adjust guns at the assembly stations.

The manufacturer also now has documented information on the torque values to answer safety-related questions.