What is an Automotive Transmission Manufacturer

The transmission manufacturing division of a major Detroit automaker provides gears for its parent company as well as for other transmission manufacturers. The large volume of business means that gear-cutting machines must run at peak efficiency while maintaining the tight tolerances needed for these critical parts. Automated SPC performs capability studies.

A gear-shaping machine on the manual transmission line was producing parts with wide variations in tolerances.

A DataMyte 953 data collector performed a machine capability study on the gear shaper. A digital dial indicator was used to measure table feed variation of the machine as the part was being cut, with data fed directly into the data collector. The measurements were taken as the table feed came into the full depth of the part. 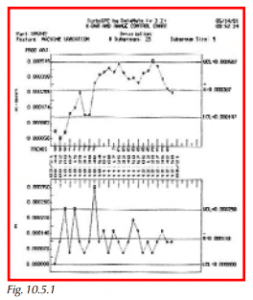 Results showed that the machine, as it was warming up, began to stabilize after the 40th piece had been run. See Figure 10.5.1. The pitch diameter size was measured after the parts were turned, and the x and R chart showed the identical warmup trend. See Figure 10.5.2. 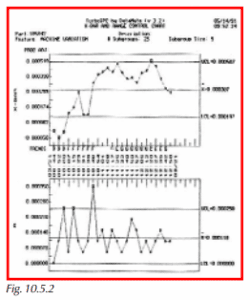 A thermal compensator was ordered for the machine to reduce the warmup trending and, thus, the piece variation. Since that time, the technique of using a DataMyte data collector to measure machine variation has been instituted in two other production areas of the plant.