What is Gage Calibration

Long before systematized gage block sets were developed, end standards had shown their value in the dimensional control of manufacturing. Gage blocks are the only means by which the standard of measurement is made available for practical use. They are a direct link between the measurer and the international length standards.

The original inch set of gage blocks was made by C. E. Johansson in 1906 as part of a program to reconcile official differences between the length standard of the English and metric systems.

Calibration is the authentication of the accuracy lineage of any measurement, tracing it back to the absolute standard. Because of this traceability, calibration frequently is considered a cure-all that can remedy any measurement problem. Following meticulous calibration, the gage user goes back to work smugly repeating the same errors that were being made before. The importance of calibration is attested by the fact that it is now a matter of law.

Systematic errors can be detected by regular, periodic recurrence; items tend to appear legitimate and desirable even when they are not. An error in calibration does not refer to an incorrect setting of the instrument but to a disparity between the input signal and the reading.

Human errors are difficult to detect when you make them, and include such common things as the tendency to read high or low. In addition, human errors generally change when the observer changes.

Random errors are distinguished by a lack of consistency and are usually errors of judgment.

Traceability is the procedure for determining that none of the connecting links between the part and the Bureau of Standards has been severed.

In view of the number of sub-contractors involved on large government projects, the traceability requirements affect much of the industry in the United States. 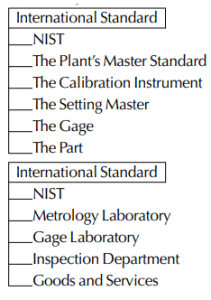 Calibration and traceability are governed by the ten-to-one rule, which states that the instrument must be capable of dividing the tolerance into ten parts. The purpose of the rule is to eliminate 99% of the instrumentation errors of previous steps in a measurement. The rule is applied to every step in the measurement sequence until the limit of the available instrumentation is reached.

The results: Fewer bad parts accepted and good parts rejected. This is a pragmatic rule based on practical results, not law. Often, practical considerations force us to deviate.

In addition, the standards state that inspection, measuring, and test equipment shall be used in a manner which ensures that the measurement uncertainty is known and is consistent with the required measurement capability

Documentation requirements for ISO 9000 and QS 9000 also state that records of the calibration/verification activity on all gages, measuring, and test equipment, including employee-owned gages, shall include: