What is Measurement and What are the Units of Measure

In modern industry, uniformity for interchangeability of parts is vital for cost-effective manufacturing. If a machine part fails or wears out, a replacement must be available and must fit. It will if the parts are made according to specific and accurate measurements. Data must be analyzed on parts and processes to determine conformance to product specifications, and data must be fed back to the manufacturing process to prevent production problems. The quantification of data on parts and processes involves defining standard units, calibrating instruments to these standard units, and using these instruments to quantify parts and processes. This quantifying is called measurement.

To allow the quantifying of data on parts or processes, defined standard units must be used. These standard units are called units of measure. They are definitions of standardized units that are used to quantify characteristics about which we are interested. Metrologists have developed systems of international units of measure for the purpose of international commerce. The primary systems in use today are the English system, the metric system, and the Systeme International d’Unites (SI). The more preferred system is now SI. Table 7.2.1 gives examples of units of measure for the three systems. 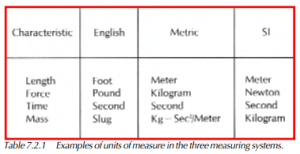 How the English system was retained

The English system was retained by the American colonies when they separated from England in 1776. This system consists of units of measures that were developed before the industrial revolution, i.e., a foot is 12 inches, a yard is 3 feet, etc. Only part of the English system is based on decimal multiples.

How the meter was defined

In 1799, a committee of French scientists, under the direction of the French government, established a system of measures and weights. A basic unit, called the meter, was defined and is the basis for the metric system. This system of measures, primarily concerned with length, area, volume, and mass, is based entirely on a decimal system. See Table A-6 in the Appendix for a list of the units of measure used in this system.

How the SI system evolved 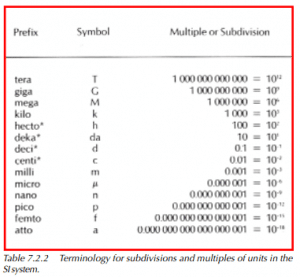 Next What are the Measurement Standards and Traceability
Table of Contents