What is Operating Characteristic Curves

Operating Characteristic Curves — The OC curve is a means of quantifying the producer’s and consumer’s risk. The OC curve for an attribute plan is a graph of the percent defective in a lot versus the probability that the sampling plan will accept the lot. The probability must be stated for all values of “P” (percent defective) since “P” is unknown. An assumption is made that an infinite number of lots will be produced. 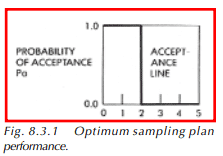 The shape of the OC curve

The shape of the OC curve can be affected greatly by the parameters of the sampling plan. Figure 8.3.2 illustrates this by showing the curve for perfect discrimination as well as the curves for the other sampling plans. As the sample size approaches the lot size and an appropriate accept number (c) is used, the OC curve approaches the perfect curve (P1). With an accept number of 0, the resultant OC curve will be exponential in shape, or concave upward as in curves 2 and 3. Increasing the acceptance number tends to push up the OC curve for low values of P (percent defective), as in curve 1. Increasing both the accept number and sample size at the same time (curve 1) gives a curve which most closely resembles the perfect discriminator curve of P1. 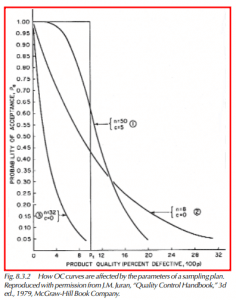 Construct an OC curve by determining the probability of acceptance for various values of P (percent defective in a lot). The probabilities of all values of P must be determined since P is unknown. There are three distributions which may be used to find the probability of acceptance. They are the Poisson, hypergeometric, and the binomial. Probably the easiest one to use is the Poisson distribution, if all assumptions are met for its use.

Some assumptions which must be met are as follows:

Many tools exist which can aid in calculating and plotting the OC curves. One such tool is shown in Figure 8.3.3. The following steps are required to plot the OC curve for a single sampling plan. 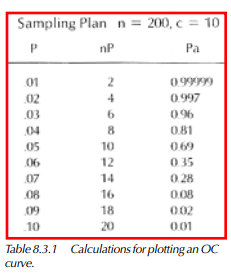 Lot formation is one of the most important factors in acceptance sampling. It is imperative that we know the pertinent details about a lot (i.e., who, when, and what) before we can make intelligent decisions with the inspection data.

The following guidelines are given to ensure the validity of inspection data. Others may exist, but are more related to individual processes. 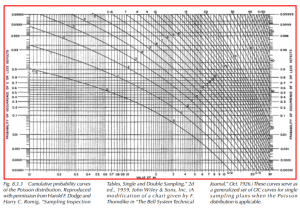 Sampling may or may not be the most effective solution for a given situation. Each situation must be evaluated individually in deciding whether to sample. Three alternatives exist for a product. One can choose to do (1) 100% inspection, (2) sample, or (3) no inspection. A thorough cost analysis of all three alternatives should be completed prior to adopting any one method. Many excellent references exist that may aid in this process. One such reference is Quality Planning and Analysis, by Joseph Juran and Frank Gryna.