What is Packaging And Printing Plant

A packaging printing plant produced 400 million cartons annually on its three, six-color lithographic printing presses and associated die-cutting & finishing equipment. As part of a company-wide quality initiative, the division was instructed to standardize its process for achieving color matches and running the presses “to the numbers” at pre-determined standard printing conditions.

The manufacturer produced folding cartons for a wide variety of commodities ranging from ice cream and dairy to facial tissue and beer. Typically, color matches were achieved by the pressman. However, they could only get the matches by making customized, non-standard adjustments to the presses. The company wanted to standardize its color-match system to ensure consistent quality printing.

The project required the plant to evaluate large amounts of data. Variables to be monitored included reflection density, dot grain, print contrast, and trap, to name a few. Up to this point, the plant used hand charting or DataMyte 862 data collectors. Plant managers realized a fully-automated system would make their evaluations easier.

The plant tested a standalone unit – using Quantum SPC/DC™ software. From that, it set up Quantum SPC/QA™ and trained operators to collect data automatically. This made data collection quicker, so operators could see in real time what was going on. It allowed them to see the results of their measurements immediately. Additionally, it allowed data collection to be completed by one person. Previously, two people were required: one to take measurements, and one to document data.

After seeing the benefits of the test system, plant managers began working to purchase DataMyte Quantum systems for each of the plant’s three presses. The corporation purchased three units approximately six months later.

As part of the quality initiative, the packaging manufacturer completely revised its quality control program at all 12 of its printing plants. It became an ISO 9000-based program, which relied heavily on paperwork, checksheets, and specifications. The company had huge books at all of its plants. Operators were required to collect and document data.

With the purchase of the units, Quantum was used to take attribute and variables data automatically, eliminating all paperwork from the press and increasing access to information. Formulas for characteristics were formatted into the computer, so it was easy for operators to retrieve data.

Approximately one year after the presses were fully automated, the plant purchased four more DataMyte units for its graphics, pre-press, plate-making, and sheeting areas. The Quantum system in these areas showed the same impact as in the printing department. That led the plant to approve the purchase of computer terminals for every machine throughout the facility, including die cutting; air hammer stripping and finishing – folding, gluing, waxing, windowing, and shipping.

Since implementing the automated DataMyte Quantum system as part of its quality initiative, the printing plant has measured a greater than 25% drop in cost of quality. That equals several million dollars in savings in overall operations.

In addition, the company has realized numerous side benefits to the automated system. The computer allows job orders and production schedules to be retrieved off the network, eliminates paper – copies are down; and provides a read-only system for all procedures, so everyone sees the most current procedure. 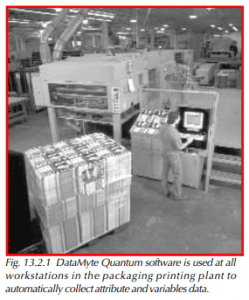 The company also made several process changes affecting outgoing quality as a result of its three month QPOC initiative:

Headquarters is currently in the process of evaluating impact of the automated system in its quality control program, and is considering implemention of the Quantum system in its other plants.

Previous What is a Plastics, Pharmaceutical And Home Health Care Products Manufacturer
Next What is Pressure-Sensitive Label Manufacturer
Table of Contents