What is Standardized Chart

Target charts are one vehicle for short-run charts, but target charts have some limitations, as mentioned in Section 4.2. Target charts must have plot points with the same subgroup size. Target charts also make the assumption that the standard deviation for each part is similar and that process average equals target, even though that is not necessarily the case. There is a type of charting for short-run applications that addresses these issues. These charts are called standardized charts.

Let’s start out with the basic x̄ chart and work our way to the standardized chart. When charting  x̄, the goal is to have an x̄ value that falls between the upper and lower control limits, which could be expressed by:

where the control limits are defined as:

The standardized 9 x̄ chart is based on the principle that control limits for any part on any process are always at ±3 standard deviations of the mean. The formulas for those control limits are as follows:

Finding the plot value for the range chart is a similar derivation to that for the x̄ plot value.

Note: None of the above formulas should be estimated with less than 10 samples (n=10).

The standardized chart can handle a variable subgroup size easily. As the subgroup size varies, so does the σxL in the equation, but the physical chart stays the same. When using standardized charts, the standard deviation of different parts on the same chart can be different. The standard deviation becomes a factor in the plot value but makes no difference to the control limits on the actual chart.

Another problem with the target chart, but solved with the standardized chart, occurs when charting a characteristic with a natural boundary, e.g., TIR for roundness. When measuring roundness, the target size is 0, but it is not possible to have parts with reading smaller than 0. This is shown in the target x chart of Figure 4.5.1a, where all the plotted points are above the centerline. Those unfamiliar with TIR and natural barriers might think that a trend (based on the number of consecutive points above double x-bar) was occurring. Looking at Figure 4.5.1b, we see a plot for the same type of information that is done in a standardized fashion. Note that the points on the standardized chart are more evenly distributed about the centerline of the chart. 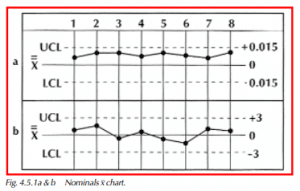 Notice that the centerline for the standardized chart shown in Figure 4.5.2 represents x as well as a plot value of 0. This does not mean that double x-bar equals 0, but that for a given value of x equal to double x-bar, the plot value will be 0 because there is no deviation from the mean. Also, notice that the control limits for the standardized x & R chart are fixed at ±3σ. 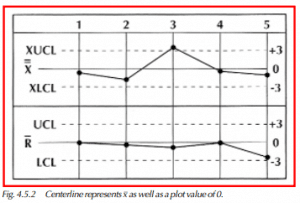 Using standard statistical techniques, we now have a method for low-volume, short-run manufacturers. Standardized x & R charts can be used to plot multiple parts of the same process on one chart. You can now chart multiple parts with different standard deviations and even with different sample sizes on a single chart. Interpretation of trends, patterns, and out-of-control points is the same for standardized charts as it is for x & R charts (Chapter 3).