What is the DataMyte Digital Clipboard Actions Designer

The Actions Designer is used to design sequences of actions. By using the drag and drop functionality, steps are added and configured in the list of actions. By using Actions Designer, users can design multi-step actions and connect the steps together in a chronological sequence. During the execution of the actions, each step runs after the previous step is executed. Data collected by mobile forms is first validated and can be routed to the following entities using actions.

You can combine any number of above steps in any order. Data routing is finalized by configuring the action and can be automatically routed to the specified entity mentioned above every time a mobile workflow is submitted.

Sequential actions are linear and progressive, and this type of action list goes from one task or process to another and does not step back in the sequence. Used in manufacturing or a production line task.

State machine actions is more complex than sequential actions and may step back in the sequence if a dependency dictates it. These actions go from one ‘state’ to another ‘state’. Used in software development or in content creation.

Rules-driven actions are higher-level sequential actions in which the action progress is determined by the rules. They use conditions to decide if expressions are ‘true’ or ‘false’ and the rules are modelled with the ‘if’, ‘then’ or ‘else’ expressions. Used in projects that have clear goals, but varying levels of specifications or rules.

A user step assigns a task to the user and involves the user filling a workflow and its submission.  When the task is assigned, the user gets a notification on their phone. When the user responds to the notification, a mobile workflow is presented to them. This is one of the mobile forms designed using Workflow Builder. A user has the option of filling up the workflow and then submitting it. A user can also reject the task of filling the workflow if the information is incomplete or for any other reason.

A system step is performed by the DataMyte Digital Clipboard platform. Typically, system steps are executed instantaneously and the action proceeds to the next step. Examples of a system step are sending an email, generating a document, performing custom processing among others. 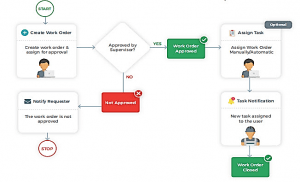 Next What are the Generic Action Use Cases
Table of Contents