What are the Measurement Standards and Traceability

For any standards system to be usable, the system must be based on units that are unchangeable. The SI system defines most of its units based on natural phenomena that are unchangeable. An example of this is the definition of a meter. The definition of a meter and other main units of the SI system can be found in Table 7.3.1. One meter can be reproduced with an accuracy of about 10–8, which is 0.01mm by definition. These definitions of units are called standards. 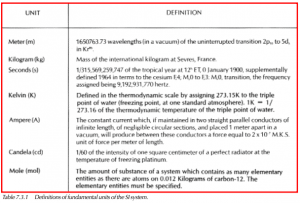 All countries maintain primary reference standards through a “Bureau of Standards” whose purpose is to construct and maintain these standards. The standards consist of copies of the international kilogram and measuring systems that can verify the units and subunits of the defined standards. These standards are then used as a basis for the calibration of equipment. It is not, however, practical for the Bureau of Standards and standards laboratories to calibrate all equipment; so secondary and tertiary standards were developed to transfer the primary standards for the calibration of instruments used in general laboratories and manufacturing areas.

Equipment used by the technicians and inspectors is calibrated against a set of working standards. The working standards are referred back to the primary standards through the use of one or more transfer standards. This reference from one standard to a higher, more accurate standard is known as calibration. Some specialists suggest that a precision of 10 to 1 be used to transfer from one standard to the next. This may not be necessary because the combination of many levels can be represented by the square root of the sum of the squares, instead of by the sums of the precisions of the levels. A precision ratio of 5 to 1 has been accepted among transfer standards to allow for a longer hierarchy of transfer standards.

When a piece of equipment is calibrated and can be related back to a primary standard through transfer standards, it is known as traceability. A system of documented certification of accuracy allows for calibration to be traceable to the National Institute of Standards and Technology, which maintains the primary reference standards. Figure 7.3.1 shows the hierarchy of standards used for traceability. 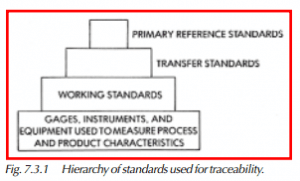