What are the Control Charts for Attributes

Attribute data is a count of nonconforming units (defective parts), or the number of nonconformities on a unit (number of defects per part). Attribute data does not require actual measurements such as length, width, or torque. It is only necessary to count the number of defects or defective units. Many characteristics of quality can only be measured in this way, such as the presence or absence of a required screw, or the number of bad solder connections on a printed circuit board. Other attribute data may be the result of data that is measurable but recorded as pass or fail, such as that from a GO/NO-GO gage.

Control charts for attribute data have a number of advantages:

There are also some disadvantages:

How Control Chart Types are Defined 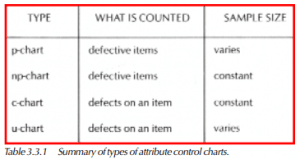 Elements of a Control Chart for Attributes

Elements of a Control Chart for Attributes A control chart is a two-dimensional line graph (Figure 3.3.1). The plotted points represent the given measure of the quality of the process from the data collected at predetermined periods of time. The horizontal axis is divided into rational groups (also called subgroups) — hour to hour, day to day, a lot to lot, etc. The vertical scale represents the quantity or percentage of defects per unit or defective units. Three control lines are also drawn horizontally on the control chart — a centerline, upper control limit line, and lower control limit line. The centerline is the average of the number of defects or defective units in the process for the total period of the process being charted. The data used to calculate control limits is also used to calculate the centerline. 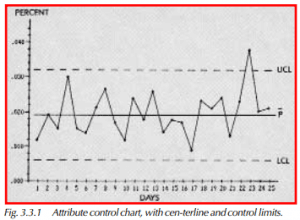 Why the Control Limits are the Key to Control Charts

How the 3-sigma Limits Were Calculated

Application and Construction of Control Charts for Attributes

The following steps describe how to use a control chart for attributes:

1) Select the area or process to be charted

Give high priority to areas where problems are already occurring. Choose characteristics that will provide the type of data needed for finding the problem.

2) Decide which attribute chart to use

3) Select the frequency of sampling

In other words, define the subgroups. The subgroup periods may be equal periods of production (hourly, daily, weekly). The periods may also correspond to equal quantities of production (lots, batches). The periods should be chosen to make it easy to find and correct problems. Shorter periods will give faster feedback on problems. It is important that the subgroups be chosen to ensure minimum variation within a subgroup. This will allow variation to show up on the chart from subgroup to subgroup.

Samples within a subgroup should be collected randomly so each item being inspected has an equal chance of having nonconformities.

Be careful not to make the chart too tall vertically. Plot the data. Calculate and draw the control lines. Frequently, the value for the lower control limit will be negative for an attribute control chart. In this case, there is no lower control limit. At least 20 to 25 subgroup points should be plotted before control limits are calculated.

Plotted points indicating a lack of control should be marked and investigated. These special causes should be corrected and prevented from recurring.

8) Eliminate causes and recalculate the chart

Reading a Control Chart for Attributes

The goal in reading a control chart for attributes is to define which points represent evidence that the process is out of control. Points on a chart that indicate only random or chance variation are the result of common causes and do not indicate the need for corrective action. Points that represent nonrandom variation are due to assignable causes and are the signals for immediate action (Western Electric, 1956). Variations above the centerline on an attribute chart are called high spots, and variations below the centerline are called low spots. The purpose of finding nonrandom variation is to eliminate the special causes that enter a process causing a change in the quality of the output.

Natural and Unnatural Patterns in Charts

The Most Important Thing to Look for in Charts

When reading a control chart for attributes, it is important to keep in mind that evidence of nonrandomness near the lower control limit (low spots) may seem to indicate that the process is producing too few defects. This may point to areas of a good process, and investigation may lead to ways of improving overall quality. Finding reasons why some subgroups have fewer defects than others can cause action for more permanent improvement in quality. Low spots, however, can also indicate that there has been an error in the inspection or the need for tighter standards.

The characteristic of this unnatural pattern is the absence of points near the control limits. Some causes of this include nonrandom sampling, samples coming from different sources, and samples being screened before the inspection.

In this case, the pattern has become predictable. An example of this is a low point always being followed by a high one and vice versa. The cause is usually in collecting the data systematically from different sources.

This is shown by a number of abnormal points suddenly appearing on one side of the centerline or the other. This indicates a major change in the process has taken place. See Section 3.2 for an example. Higher shifts in level may be due to a new batch of poor material, a change to a new operator or poor machine, or a tightening of inspection criteria. Lower level shifts may indicate a change to better operators, machines, methods, or a loosening of standards. Gradual changes in level may also occur with similar causes but over a longer period of time.

Cycles are short trends occurring in repeating patterns. They may be caused by regular differences in suppliers or nonrandom data collection.